This appeared on my Facebook page today – shared by a lovely friend and Doctors Receptionist.

This notice is displayed at the Royal Arsenal Medical Centre – well done to them.

I totally agree that every Doctors Surgery shoul have one of these notices displayed in their waiting room. 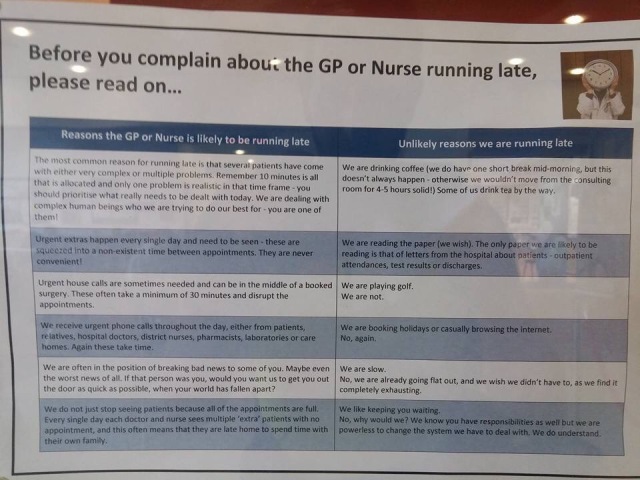 Finding out the reason for an unhappy patient or customer is key to putting the problem right – or at least trying to put it right. Ignoring it will not make it go away, and it won’t help good relations in the future.

Often the main reason for a unhappy person is down to lack of communication and this can often lead to outbursts of anger, frustration, arguments and a possible complaint. Whilst you are not there to take abuse, you have to have a listening ear, an open mind, and an apology if you feel that it is appropriate.

What you have to remember that people attending surgeries or clinics are often unwell, in pain, anxious, or suffering with mental issues or they may be relatives or friends of the patients concerned about their wellbeing.

Its how you deal with a complaint that will determine how far it might go.

A good example of a breakdown in communications happened to a friend of mine the other day.

My friend had to go to our local hospital for an epidural injection. She received an appointment for 11.00 am – She telephoned and asked if she could have an earlier appointment. She explained that a friend who would be taking and collecting her had another appointment early that afternoon. She explained to the clerk that she had 2 previous 8.00 appointments and she had been seen and out by 11.00. The clerk was very helpful and said she would send out another appointment, which she did. It was for 08.00 – perfect.

We arrived at 07.55 to get her booked in. We went into the admissions department to find that there were about 40 other people sitting there already, and more following in behind us. There were people standing in the corridor, as there were no more seats.

The bookings clerk came to the door and shouted *who’s next* – there seemed to be no order at all. I noted who we had walked in behind and I closely kept an eye on them and my friend followed in after they had been seen. Tempers were rising in the waiting area, and I am sure blood pressure taking a rise too. The system was in a total mess.

No apology from the clerk when my friend went in about the long wait. The clerk knew people were not happy and did all she could to avoid any eye contact. She never took her eye off the computer all the time it took to book my friend in.

We went along to the ward and a nurse took all the necessary details. She asked my friend to get ready, as she was due to go down for the injection fairly quickly. We both laughed and said that we probably would have time for a coffee afterwards before my next appointment.

My friend sat and waited, the curtains were around the bed so all we could do was sit and listen, we heard other people being booked in, and going down for their procedures – I realised that there were more than one doctor on so didn’t think too much of it.

We sat and waited a bit more, people were coming back up, getting ready and going home, there were more people arriving. A nurse came in and spoke to one patient telling them that there were two people in front of them and they would be 3rd to go down. Perhaps my friend was the first or second patient – apparently not – we were still sitting there when that patent went down. She came in and told another patient they were next to go down.

It got to 11.00 and my friend was very conscious of the time. I tried to reassure here that I could wait a bit longer, but she went out to find someone to ask what was happening. She met a nurse who I can only say was not very helpful at all.

My friend explained about me having another appointment, the nurse said that we should have come prepared to wait, this was a day ward and my friend should have expected to be there for some time.

My friend explained that she had spoken to the clerk on the telephone when booking the appointment and she didn’t mention anything about the possibility she might be there for the day and there was nothing to indicate that on her appointment letter when she received it.

My friend explained about her previous 2 visits and that she had 8.00 appointments on both those days and both times she had been seen and out by 11.00.

The nurse said that she must have been *lucky* those times.

The nurse went on to say that if she were seen fairly soon that she would be done and out within half an hour – but then went on to say – of course you still could be here for a good while yet.

Never once did the nurse offer to go and see where on the list she might be. She really did not want to be bothered. She really was not any help at all.

So, my friend worried about me getting to my next appointment told the nurse that she was sorry but she could not wait any longer – the nurse just said “well that’s entirely up to you”

My friend came back, got dressed and we left. She was extremely upset, and angry at the way the situation had been handled. I felt bad that I could not have waited any longer with her.

She is a pretty laid back woman, but of course this could have been someone that might not have that accepted the situation so lightly and of course could have caused a unpleasant situation.

What could have been done to make this situation better?

I feel that this whole situation from start to finish resulted in a lack of communication and could have been handled so much better at various stages from the booking, admission and the appointment.

What do you think?

Find out about our Reception Training Courses